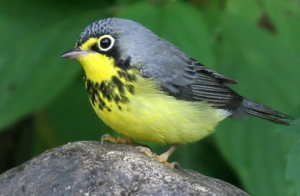 Bird Conservation Region 12 (BCR 12, the boreal-hardwood transition zone) is home to an impressive suite of breeding warblers. From a conservation perspective, Kirtland’s Warbler and Golden-winged Warbler first come to mind, and rightfully so. However, another lesser known songster also occurs in our Priority Forest Bird Species-Habitat Matrix and needs conservation help. In this species spotlight, we introduce you to the Canada Warbler (Cardellina canadensis). 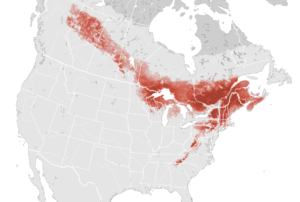 Aptly named, approximately 80% of the world’s 2.5-3.0 million Canada Warblers nest north of the U.S. border throughout the boreal forest of Canada (Figure 1). About 10%, or almost 300,000 individuals, can be found throughout the U.S. portion of BCR 12, with the highest numbers in northwest Wisconsin and northeast Minnesota. Their time in the north is short, spanning roughly late May to early September, and the bulk of the population winters over 3,000 miles away in the Andean highlands of northern South America.

The Canada Warbler has declined by more than 60% in the past 50 years, both in BCR 12 (Figure 2) and range wide. This prompted Partners in Flight to list it as a Yellow Watch List species in their 2016 Landbird Conservation Plan (with a high conservation concern score of 14 out of 20), as well as a 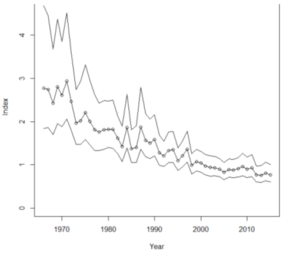 However, the International Union for the Conservation of Nature categorizes Canada Warbler as Least Concern. Canada also recently upgraded the Canada Warbler’s status from Threatened to Special Concern, and no U.S. states in BCR 12 currently list it as a Species of Greatest Conservation Need. These assessments are the result of long-term declines that have stabilized since 2005 (Figure 2), and moderate numbers persisting over a wide geographic range. 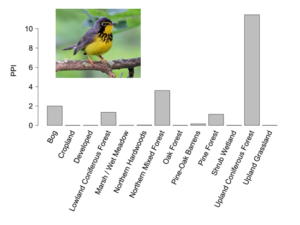 Figure 3. Habitat profile for the Canada Warbler based on habitats within 200 m of point counts where the species was present during the Minnesota Breeding Bird Atlas (2009-2013). PPI = Percent Perfect Indicator, as explained here (https://mnbirdatlas.org/data-and-methods/methods-of-analysis/).

Canada Warblers breed in moist deciduous and mixed deciduous-coniferous forest with a dense understory of shrubs and young saplings. They often occur on slopes, near wetlands, streams, and other water sources, as well as in areas having abundant moss cover, woody debris, or other complex ground cover.

Canada Warblers benefit from forest management practices that increase understory vegetation density, especially near open water, and retain canopy trees. Specifically, maintain or create mixed-wooded stands with 50-70% canopy cover, a dense understory (height of 0-1.5 m [=0-5 feet]) and mid-story (2-10 m [=6-30 feet]), and an uneven forest floor. Stand size requirements vary, but the species is considered sensitive to fragmentation. A 2016 Minnesota study by A. Grinde and G. Niemi found that a greater percentage of forest cover within 500 m (=1,640 feet) of a forest stand positively affected the site’s suitability. 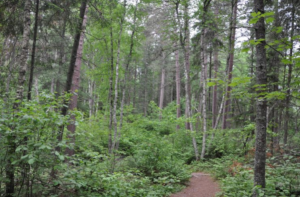 This species will respond favorably to timber harvest, for a limited period, provided a well-developed shrub layer is present and some trees are retained. Similarly, populations initially decrease after fire but later benefit from dense regenerative growth. Maintaining structurally complex understories may require reducing white-tailed deer densities in conservation areas designated for Canada Warblers and associated species. Where possible, allowing mixed forest stands to mature and undergo natural disturbances will create small canopy gaps that diversify forest structure and increase the shrub layer, in turn greatly benefitting this species (Figure 4). These gaps may be mimicked by selection cut and shelterwood timber harvests. Keeping in mind that habitat preferences may vary across the species’ range, detailed best management practices are available for the northeastern U.S. and Atlantic Canada.

OTHER THREATS AND CONSERVATION ACTIONS 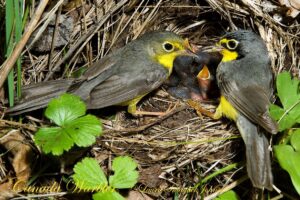 Populations of Canada Warblers are limited on the breeding grounds by the reduction of forest understory and canopy cover resulting from sources such as urban expansion, forest maturation, adverse forestry practices, and white-tailed deer. The species is considered Climate Threatened by National Audubon and could shift entirely out of its current summer range by the year 2080. During migration, collisions with towers, buildings, and windows are of high concern. Canada Warblers also face major threats on their wintering grounds, where nearly 90% of mid-elevational tropical forests in the northern Andes have been cleared for human development, including sun-grown coffee production.

In response to population declines and these ongoing threats, the Canada Warbler International Conservation Initiative (CWICI) was established in 2013. This multinational, public-private partnership aims to improve the population status of the species by bringing together the forest industry, representatives from Indigenous communities, academia, and government and non-government biologists in the western hemisphere. After years of collaboration, CWICI is nearing completion of a full life cycle conservation action plan for Canada Warblers. The Northern Forest Bird Network will share this critical resource when it becomes available. In the meantime, we can all help Canada Warblers by using sound management practices, reducing window collisions, and buying shade-grown coffee!