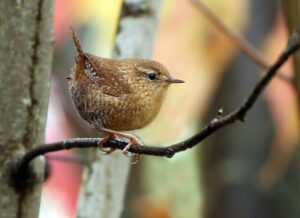 Any line of work calls for prioritizing limited resources where they are needed most. In the bird conservation world, that often means focusing effort on certain species and habitats or incorporating best management practices for these targets into projects with other primary goals. At our 2018 workshop in Ashland, attendees expressed desire for a consolidated list of forest bird species that conservationists, land managers, and foresters could rally around for planning efforts or conducting on-the-ground activities. To meet that need, the Northern Forest Bird Network steering committee is pleased to announce the Priority Forest Bird Species-Habitat Matrix.

How We Developed The Matrix 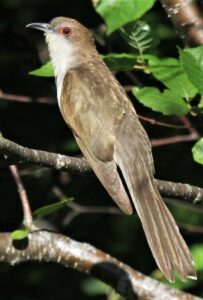 The primary drivers behind building the list were several products from Partners in Flight (PIF) with species designations specific to our focal region, Bird Conservation Region 12 (BCR 12). First, we included species identified as a Regional Priority in PIF’s 2016 Landbird Conservation Plan, including Kirtland’s and Golden-winged Warblers, Black-billed Cuckoo, and Evening Grosbeak, for example. Most of these species also made PIF’s Continental Watch List, meaning they were in highest need of conservation action, while one species, Least Flycatcher, was added as a PIF Common Bird in Steep Decline. 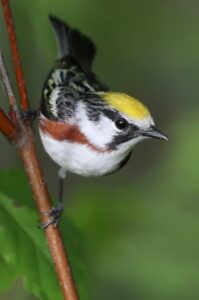 To incorporate more species that conservation practitioners could impact in the region, we used PIF’s Avian Conservation Assessment Database to add Regional Stewardship Species, meaning those species where ≥ 25% of their breeding populations occur in BCR 12. Six of the eight species are warblers, such as Blackburnian, Chestnut-sided, and Black-throated Blue Warblers, and most are rather common in the region. However, while of less immediate conservation concern, BCR 12 is vital to sustaining these species into the future. As such, we can – and must – ensure our forest management activities benefit these species and their habitats.

Finally, a third suite of species rounds out our priority list, selected largely for the habitat qualities they represent. For example, Swainson’s Thrush serves as a denizen of older-growth woodlands, Canada Jay as a symbol of climate change impacts in coniferous lowlands, and Winter Wren for its reliance on coarse woody debris. Although the U.S. portion of BCR 12 lies at the southern edge of the breeding range for most of these species, they are good indicators of forest health, and their populations are generally declining in our region. 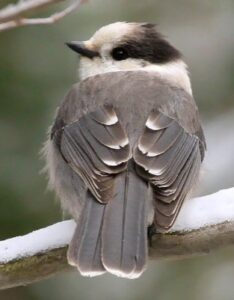 Our priority species matrix also crosswalks with Joint Venture planning (focal species) and State Wildlife Action Plans (Species of Greatest Conservation Need) and provides associated information for each species, such as a coarse assessment of preferred breeding habitat types (e.g., northern mesic or xeric forest, wet shrublands), forest successional stages (e.g., forest openings, closed canopy with understory, young forest), and special considerations, such as sensitivity during breeding season to fragmentation, coniferous cover, and climate change. We recognize that some or even many practitioners approach their work from a habitat, not species, perspective, and thus hope these features of the matrix provide necessary and useful guidance.

How The Matrix Can Be Used

There are many potential applications of this Priority Forest Bird Species-Habitat Matrix for biologists, conservationists, foresters, land managers, and private landowners across BCR 12. For example, conservationists can implement bird monitoring efforts that target these priority species to improve population estimates and trends or study the effects of climate change on sensitive priority species. Biologists could conduct research on some of the list’s lesser known species, such as Evening Grosbeak, Connecticut Warbler, and Olive-sided Flycatcher, through telemetry, banding, nesting studies, surveys, modeling, and more.

Landowners or foresters can also use the priority matrix to inform on-the-ground management decisions. The matrix makes it easy to focus on a desired forest type and identify potential changes that could be made to improve priority forest bird habitat. For example, they could improve forest structural diversity or protect and maintain key components of forest stands, such as conifers, snags, downed wood, and large forest tracts, that are critical for several priority species.

Ultimately, this matrix is a working document that can also inform the development of guidebooks (e.g., Birder’s Dozen Pocket Guide for Vermont Foresters) and best management practices for foresters and land managers. As is, it has varied uses and can be adapted to fit the needs of your specific project. In fact, that’s exactly what’s already happening in some parts of our region, most notably in the Forestry for Michigan Birds program, a multi-stakeholder partnership aimed at promoting and scaling up bird-friendly forestry. Stay tuned for our next newsletter showcasing this new and exciting project!

To view and download the matrix, please visit: https://umgljv.org/partnerships/northern-forest-birds-network/