Kirtland’s Warbler Census 2021
The Kirtland’s Warbler Census was held in June 2021 and the results estimated that there are 2,245 pairs of KIWA’s, which is more than double the 1,000-pair recovery goal for the species – which has been exceeded over each of the past 20 years. The census was conducted by staff members from the Michigan DNR, US Forest Service, US Fish and Wildlife Service, American Bird Conservancy, Kirtland’s Warbler Alliance and many other volunteers. Groups from these organizations surveyed nesting areas, listening for singing males. Each male found is presumed to have a mate, so the number of males also approximates the number of pairs.

In 2017 and 2019, partial surveys were completed. This year’s thorough census was the first full count of Kirtland’s warbler since 2015, when 2,365 singing males were counted. The count is believed to be our best estimate of adult males of the global population of this highly localized bird species.

Across the Upper Peninsula, a record number of 67 singing males were found, including 42 on the Hiawatha National Forest and 25 on state forest lands, with 22 of those situated within recovering jack pine forests burned in the 21,069-acre Duck Lake Fire of 2012.

Kirtland’s warbler surveys have been conducted in Michigan since 1951. The species was among the first animals included when the Endangered Species Act was passed in 1973. Populations sunk to a low of 167 pairs in 1974 and 1987 before mounting a gradual recovery. Aiding greatly in that return were cooperative efforts between state and federal agencies, along with conservation groups, to conserve and expand suitable jack pine habitat and control brown-headed cowbirds.

By 2001, the number of Kirtland’s warbler pairs in Michigan had surpassed 1,000, while the places the birds were located expanded to include the U.P., Ontario and Wisconsin. The birds migrate to and overwinter in The Bahamas.

The Kirtland’s Warbler Breeding Range Conservation Plan was developed in 2015 and is now the guiding management strategy for the species. Additionally, funding and other commitments to habitat management and cowbird control are in place to ensure continued conservation actions in the absence of Endangered Species Act protections. 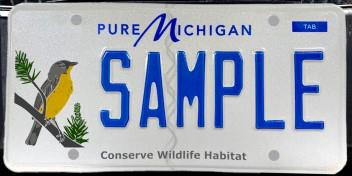 KIRTLAND’S WARBLER TO GRACE 2022 WILDLIFE HABITAT LICENSE PLATE
Since December 2017, Michigan’s wildlife habitat license plate has featured an elk to mark the 2018 celebration of 100 years of elk in our state. Beginning in January, the next species to adorn the plate is the Kirtland’s warbler – to celebrate the recovery of this unique bird!

The weekend starts with the Kirtland’s Warbler Festival Home Opener on Friday June 3rd from 5:00 PM to 8:00 PM at the Marguerite Gahagan Nature Preserve, 209 W. Maplehurst Dr., Roscommon, MI 48653. Enjoy a social evening, including a nature hike, social time with beer and wine tasting, and appetizers as Kirtland’s Warbler Weekend kicks off. Our keynote speaker will be Joyanne Mittig from American Bird Conservancy, presenting Forestry for Michigan Birds.

For more information and updates about these events, visit the Kirtland’s Warbler Festival Facebook www.facebook.com/kirtlandwarblerfestival , or email at kirtlandsfestival@gmail.com. 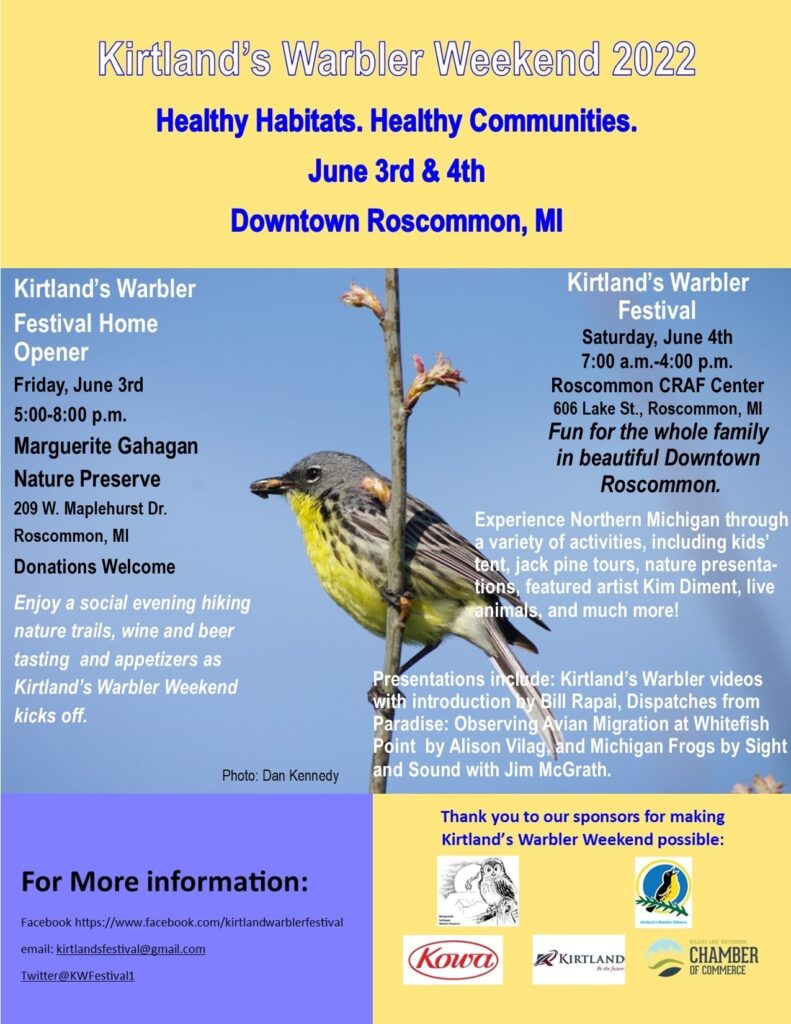