Unlocking the Mysteries of the Boreal Chickadee 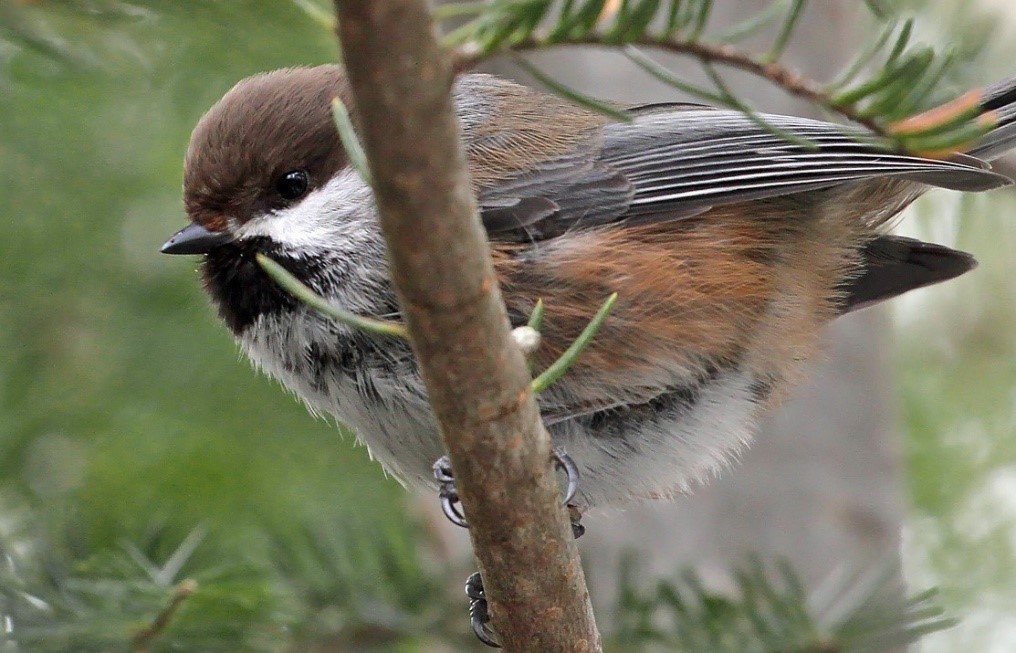 SPECIES BACKGROUND
Boreal Chickadees (Poecile hudsonicus) live in northern boreal coniferous forests (Figure 1). This species can be found in highest densities in Alaska and Canada, but the most southern portion of their range extends into the forested peatlands located in the northern section of Bird Conservation Region 12 (BCR 12, the boreal-hardwood transition zone). In this region, Boreal Chickadees are permanent residents and are strongly associated with mature, conifer-dominated peatlands. They are often found in habitats with other coniferous-dependent bird species, such as Golden-crowned and Ruby-crowned Kinglets (Regulus satrapa and R. calendula). Although they look similar to the more common Black-capped Chickadee (Poecile atricapillus), but Boreal Chickadees have a brown crown and a gray nape with a small cheek patch. The Boreal Chickadee’s “chick-a-dee” call is also buzzier and slower than the call of the Black-capped Chickadee.

In the southern part of their range, suitable habitat consisting of mature black spruce has been reduced due to direct anthropogenic disturbances such as peat-mining and logging, and indirectly due to climate change. Population trends are poorly known but Wisconsin Breeding Bird Atlas II recently documented significant declines there and anecdotal observations indicate similar declines in Michigan’s Upper Peninsula. Higher numbers persist in northern Minnesota, but the species also may be declining there. Accordingly, the Boreal Chickadee is listed as Species in Greatest Conservation Need (SGCN) in Minnesota and Wisconsin and is at risk for being lost as a resident species in the southern portions of BCR 12. Preserving and restoring quality breeding habitat is critical for Boreal Chickadee conservation, but there is a significant knowledge gap associated with identifying what exactly quality habitat for this species looks like. To develop effective conservation plans for this species, additional information about their basic ecological needs is necessary to help identify forest and habitat characteristics that influence full- life-cycle events such as nest success, juvenile survival, and habitat needs of post-fledgling birds.

To fill this knowledge gap, the Natural Resources Research Institute at the University of Minnesota-Duluth initiated a study in 2020 in the Red Lake Wildlife Management Area in northern Minnesota to learn more about the activities of Boreal Chickadees during the breeding season (see Figure 1). This is a critical time, as it is the only time individuals can be added to the population. However, the nesting and post-fledging periods are associated with high risk for mortality.  The goal of our study was to identify which forest characteristics influenced overall survival of juveniles during this precarious time of life. Specifically, we assessed how stand composition, age, and fragmentation influenced breeding density, nest success, nestling growth, and juvenile survival.

Boreal Chickadees are cavity-nesting species and readily use nest boxes for breeding. Therefore, we deployed nest box arrays (213 total boxes) in three study sites (Figure 1 and 2), which allowed us to control for potential differences in cavity availability between sites. The study sites have similar forest cover types (predominantly mature black spruce) but are different ages and have varying degrees of fragmentation in the surrounding landscape. To quantify differences in habitat quality between sites, we are documenting nest density, parental provisioning rates, and nestling body condition and growth rates, as well as post-fledging movement and juvenile survival. 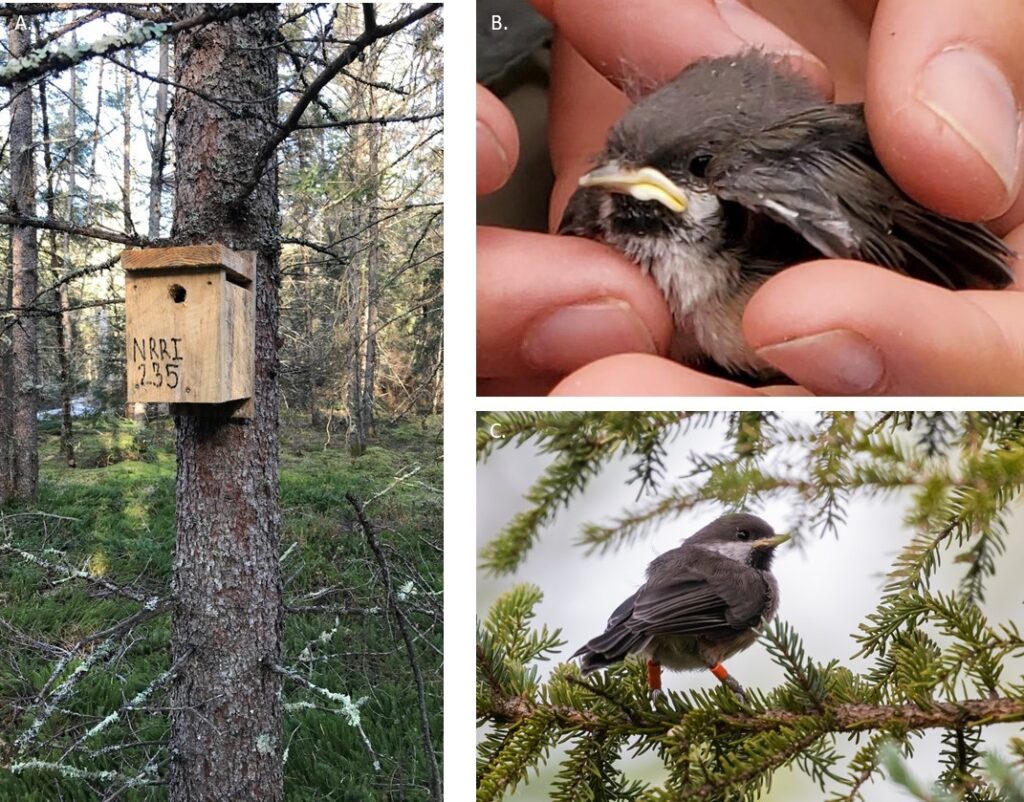 Our study is ongoing, but during the 2020 and 2021 breeding seasons we documented outcomes of 25 nests, tagged 40 fledglings from 18 broods, and collected data at over 900 habitat vegetation points. At this point in our study, the overall nest success (one or more individuals fledged) has been high (80%), with Red Squirrel (Tamiasciurus hudsonicus) and Pine Marten (Martes americana) predation as the leading cause of nest failure (20%). The highest risk of post-fledge mortality is within the first three days after leaving the box. During this time period survival is 58%; we believe 66% of mortality was caused by predation and the remaining 33% due to exposure to the elements (e.g., strong storms the night after fledging). Very few mortality events occurred after the first few days out of the nest. Through our tracking of juveniles we have learned a lot about their behaviors during the post-fledging time period. For example, the broods typically stay with both parents and move around together for the first 21 days post-fledging. Daily movement distance averaged 100 m (328 feet) during the first 10 days after leaving the nest and increased to 200 m (656 feet) as the juveniles grew and became more proficient fliers. In general, the broods remain relatively close to the home range of the parents and would avoid large openings and hard-edged transitional areas of the black spruce forest.

Once the juveniles reached approximately 21 days post-fledge, the broods split from the parents and began to make longer movements of on average 300 m (984 ft) from the “core” area and tended to join up with mixed-species flocks consisting of juvenile Ruby-crowned and Golden-crowned Kinglets, Dark-eyed Juncos (Junco hyemalis), and Nashville (Leiothlypis ruficapilla) and Yellow-rumped (Setophaga coronata) Warblers. We also frequently saw Boreal Chickadees from multiple broods join a single mixed-species flock. Much longer daily movements of up to 1.7 km (a little over 1 mile) also occured during this period, presumably as Boreal Chickadees sought suitable available (i.e., unoccupied) habitat; we fondly refer to this time period as the “roaring 20s” stage of life for the chickadees. Around 40 days after fledging, the Boreal Chickadee juveniles typically settled into a regular area and started to make less frequent large movements ( approximately 200 m average daily movement) across the landscape.

To learn more about the critical nesting period, research is currently being conducted by Kara G. Snow, a graduate student at the University of Minnesota-Duluth. Her research is focused on determining whether there are differences in food availability between sites by characterizing the growth and diets of nestlings using eDNA. Together, these data will help identify both broad-scale and detailed microsite-specific characteristics associated with high quality breeding habitats. This information can be used to guide restoration and management actions to maximize breeding season productivity for Boreal Chickadees.