The Joint Venture Landbird Committee met 1-3 May on the shores of western Lake Erie. The focus of the meeting was revision of the 2007 JV Landbird Habitat Conservation Strategy. However, with many new members in this group, meeting organizers considered relationship-building activities when selecting a gathering location. The setting was unique and exceptional for this type of gathering: the Winous Point Marsh Conservancy and Shooting Club is the oldest waterfowl-hunting club in North America with a fantastic lodge and meeting facility. It is also located on a major migration corridor for landbirds moving between South American wintering areas and North American breeding areas. Meeting dates strategically aligned with the start of one of the greatest songbird migration spectacles in North America, with birds tightly concentrating in the forest and swamp edges around the Lake Eire shore. Daily meeting times ran from 9 AM to 6 PM so committee members could spend the first two hours of each day birding together. 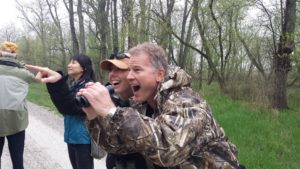 Of course, bird watching these days can be sophisticated, especially with a bunch of scientists. For example, the species of birds observed, the number, and their GIS locations were recorded each morning in an eBird app, making these data available to bird conservation planners everywhere. A typical morning in the field exceeded 75 species of birds, with several rare (e.g., Lark Sparrow, Golden-winged Warbler) and beautiful songbirds observed in this migration bottleneck along the shore.

Other enjoyable aspects of the meeting included a BBQ dinner prepared by a Winous staffer (and bbq chef), plus a fish fry of walleye caught on the nearby Detroit River. In addition to improving friendships, sharing bird identification skills, and expanding general knowledge about landbirds, the group made great progress in the JV planning process. Tom Will, veteran landbird scientist and “elder statesmen” for the JV Landbird Committee, summed up the meeting in a recent thank you note:

Fellow Landbird Committee members:
I just wanted to thank all of you for such a great meeting last week. The movement forward on content was gratifying, but I especially enjoyed the camaraderie (camaradERIE) with each and every one of you. The meeting will go down for me as one of the most special I’ve attended in my career.
Cheers and thanks again, Tom