Managed forests across the Great Lakes region provide critical habitat for hundreds of resident and migrant bird species. Forest management provides an important opportunity to cultivate and conserve critical habitat for breeding birds. Like many forest bird species, American Woodcock, Golden-winged Warbler, and Veery are experiencing significant population declines across their range, and large portions of their breeding populations are found in early successional forests in BCR 12. Densities of these species are highest in young forests, providing a mutually beneficial opportunity to combine forest management and bird conservation.

Conservation efforts are most effective when habitat management plans include recommendations to maximize productivity from nesting through the post-fledgling period. The breeding season is the only period in the annual cycle during which bird populations increase in size, so it is imperative to add as many new individuals as possible during this time.

Many breeding season studies investigate only a small fraction of this time (e.g., point counts focus mainly on territorial males) while failing to recognize the importance of other portions of the breeding season. For example, the period after young birds leave the nest but before they disperse and/or migrate (i.e., the post-fledging period) is poorly understood. Research suggests that for many species this is a time of high mortality during which fledglings may seek very specific habitats or microhabitats that are dissimilar from those in which they hatched. Since our goal is to recruit as many birds as possible into the adult population, it is essential to understand what fledgling birds require during this vulnerable period of the annual cycle. To address this knowledge gap, we initiated a study of habitat use by American Woodcock, Golden-winged Warbler, and Veery during the post-fledging period in 2019 and 2020. 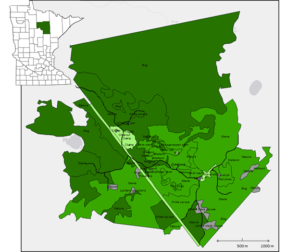 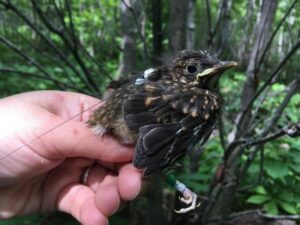 We found and monitored a total of nine American Woodcock, 11 Golden-winged Warbler, and 45 Veery nests over the two field seasons. Preliminary analysis of hundreds of telemetry points, along with vegetation surveys from the 2019 and 2020 season, suggests that all three species heavily rely on “mid-successional” forest stands during the post-breeding period (Figure 3). While these stands contain a variety of cover types and range in age from 10-35 years post-harvest, all provide fledglings an important combination of adequate canopy cover and high stem density. All three focal species preferred areas with high woody stem densities and sought out this microhabitat far more often than random movements would predict. Juvenile American Woodcock were also found in areas that had more leaf litter and downed logs compared to other nearby areas. 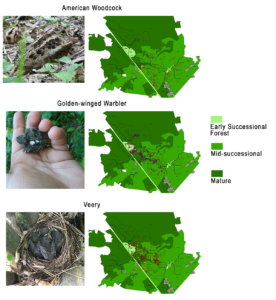 Forest management practices that increase potential for structural diversity within stands as they mature is important for these species. For example, encouraging foresters to leave higher densities of downed logs after a harvest, uneven-aged stand management, when appropriate, and retaining trees in “clumps” after harvesting are likely beneficial for increasing breeding season productivity for American Woodcock, Golden-winged Warbler, and Veery.

Our partners in this study were UPM Blandin and the National Air and Stream Council (NCASI). Funding for this project was provided by the Minnesota Environment and Natural Resources Trust Fund, as recommended by the Legislative-Citizen Commission on Minnesota Resources (LCCMR).